A Simple Explanation of the Astrology Birth Chart 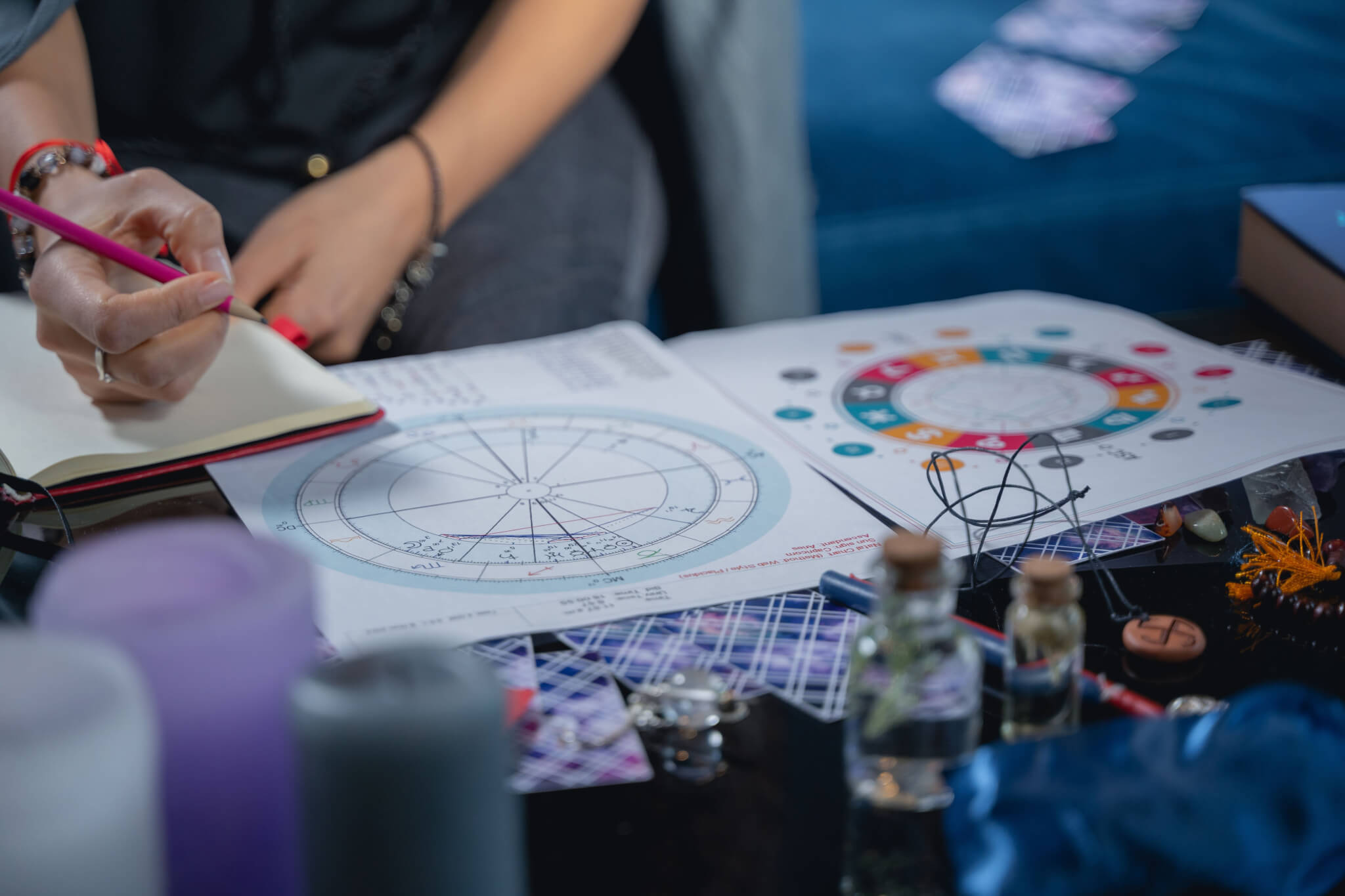 Astrological birth charts can seem incredibly complicated to try and navigate. Birth charts, also known as natal charts, hold a variety of information surrounding the celestial positionings during the precise moment of someone’s birth. Each celestial body and its position can reflect a new detail about a person’s past, present, future, and personality. Rather than trying to explain the complexities of each component and how they are used during the interpretation phase, we’re going to focus on the basics as we explore the different aspects of a birth chart.

Once you learn to understand the basics of natal charts, you will begin to see that while they can be complicated, they are actually a lot simpler than they may seem. Think of the chart as being like a clock. Instead of numbers, we have houses of the zodiac (e.g. Leo, Scorpio, Aries, etc.), and instead of hands pointing to the numbers, we have planets.

Just as you would look to the hands of a clock to see which numbers they point to; we look to the planets to see which house of the zodiac they are in. Each planet carries a different meaning, and by combining all the information provided in a birth chart, we can better understand a person and their place in this universe.

So, let’s explore what each of these celestial bodies represents.

The Sun on Natal Charts

One of the most well-known features on a birth chart is the sun sign. You may be more familiar with this sign by its other name – your zodiac sign. Your zodiac sign or sun sign, which is also referred to as a star sign, relates to the house of the zodiac that the sun was in at the moment of your birth.

The sun represents your basic self. It highlights aspects of your ego, your base personality, and the general path you will walk along in life, including:

We often think of the moon as being tied to emotions. Its gentle pull drags the oceans, ultimately giving us tides. It’s therefore appropriate that this celestial body gives us insight into a person’s emotional state. It reflects the deepest aspects of our selves, the parts of us that are most private. Sometimes, it can reveal things that we’re unaware of within ourselves.

You may be familiar with the phrase ‘Mercury is retrograde’, which often refers to a time of poor communication and a lack of understanding as a result of the planet’s apparent change in direction in the night’s sky. Mercury, named after the Roman God of the same name, represents the type of communicator a person is. This isn’t limited to their ability to speak, as it also indicates how well they can understand and pass on complex problems and ideas.

People often mistake Venus as being a representation of love. While this is one aspect of the planet’s influence, it isn’t the full picture. Venus indicates our deepest passions. It points to the types of causes we will support. If you’ve ever felt so passionate about something that it’s like there’s a fire burning within your core, that is something that Venus could indicate. For some people, the passion might be art or music, for other it might be politics or charity work.

Mars is the Roman version of Ares, the God of War. It should therefore come as no surprise that this planet represents emotions that we would often associate with war: aggression, disagreeableness, motivation, determination, and pride. On a different note though, Mars also represents our energy levels and the degree to which we follow our passions. It’s an important aspect of any birth chart.

The next celestial body on any birth chart is the gas giant, Jupiter. While natal charts are themselves spiritual, Jupiter symbolizes a person’s deeper spiritual paths and journeys. Depending on the zodiac this planet falls in, we can see suggestions of a narrow or broad mind, a drive towards philosophy or science, or the need to educate or heal. You could say that Jupiter represents the type of path you will walk along.

It’s interesting that Saturn is the only planet in our solar system with rings, as it represents the time, regulations, and the cyclical nature of all things. On a birth chart, Saturn indicates how well someone will learn from past mistakes. It’s a reminder of the karmic nature of reality: positive actions lead to positive outcomes, while negative actions lead to negative outcomes. You can’t escape the ripples of your own existence. Work hard and you will be rewarded but squander your gifts and you will lose them. These are the messages that Saturn relays to us via natal charts.

This planet is at such an extreme tilt on its axis that many people describe it as orbiting the sun on its side. It’s fitting, then, that Uranus represents rebellion on your birth chart. Rebellion refers to more than just fighting against a government or regime. Rebellion is how different you’ll be from the mold i.e. will you conform to societal norms or carve your own path through life? Will you be free-thinking, or will you follow the rules and only explore the same areas of this universe as other people?

Neptune is now the furthest away planet in our solar system, thanks to the declassification of Pluto. As far as natal charts are concerned, Neptune represents imagination and creativity. It’s a person’s ability to actively choose to explore reality, fantasy, or both. Within a birth chart, we use Neptune to see how likely somebody is to lose themselves in a fictitious world or even their ability to create a world of their own. If you check the birth chart of any great writer, you will be able to see the influence of Neptune.

The final celestial body we need to discuss in relation to natal charts is Pluto. In a way, Pluto symbolizes the passage of time. It’s a reminder that we’re all in a constant state of flow from lived, live, will live, and dead, dying, will die. Where one thing ends, no matter how final it may seem, it’s simply the end of another cycle. On natal charts, Pluto highlights a person’s ability to cope with change, as well as how well they can manifest it.