What are the Different Moon Phases? 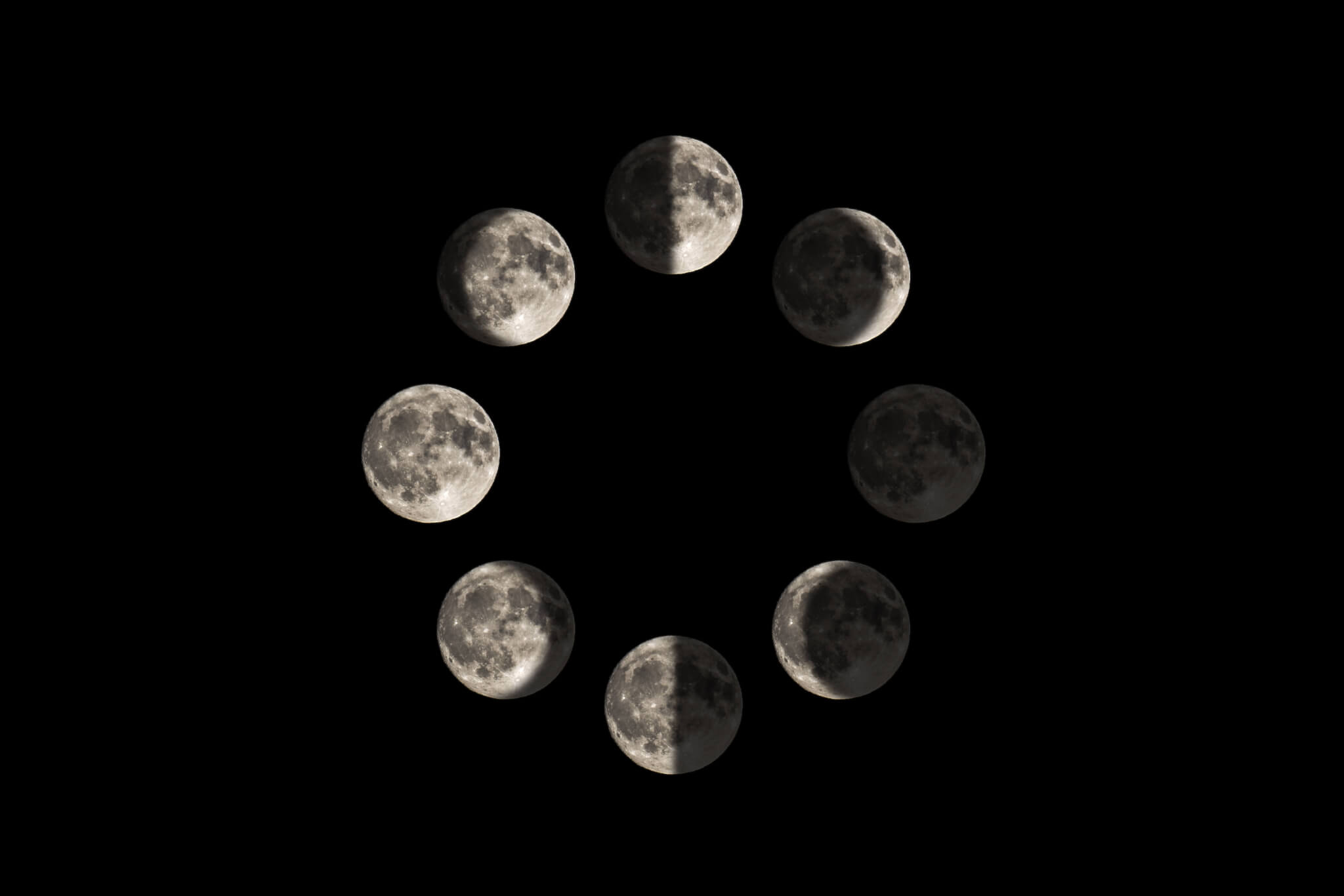 When it comes to the different moon phases, there are a lot of terms to wrap your head around: blue moon, harvest moon, thunder moon, waxing crescent, waning gibbous, and so on.

Trying to understand the power of the moon’s energy, and how we’re affected by the moon cycle, is impossible without first coming to terms with the different ways we see and experience the moon as a result of its rotation and orbit.

As such, we’re going to walk through the various aspects of the moon cycle, from moon phases to spiritual significance.

What is the Moon Cycle?

We see the moon’s surface due to the reflection of sunlight. But it’s important to understand that half of the surface is always facing the sun. That never changes. What does change is how much of the light is reflected towards Earth. As the moon orbits our planet, it can reflect all of the light (full moon) or none of the light (new moon).

How much of the moon we see is largely based on the position of the sun and the Earth, rather than anything the moon is doing. However, the speed at which the moon rotates on its axis matches the speed that it orbits our planet.

This means that we always see the same side of the moon. The other side is known as the dark side of the moon, but it’s only dark from our perspective when really it gets just as much light as the rest.

We just don’t see it. Now that we understand the physics of why the moon phases exist in the first place, we can begin exploring them.

There are considered to be 8 primary moon phases. While some of these phases reflect the same amount of sunlight as others, the appearance of the moon is different from each one. By exploring each of them one at a time, we can demonstrate one full moon cycle, which usually takes about 27 days. We’ll start with the new moon and work our way around each of the moon phases.

From Darkness to Light

The new moon represents the point where none of the moon’s reflected light is visible from Earth. To us, the moon disappears from view. Sometimes we can see its outline faintly in the night’s sky, but it isn’t the bright, glowing orb that we’re familiar with. We’ll consider this the first of the moon phases, and it happens when the moon’s position is between the Earth and the sun.

As the moon being to orbit about 45 degrees around the Earth, we enter the waxing crescent phase. We may associate the term ‘waxing’ with the removal of hair, but in relation to moon phases, it suggests that the visible surface of the moon is increasing in size. The word crescent simply refers to the shape, which is curved and thicker in the middle than the ends.

As the moon reaches 90 degrees from its starting point, a quarter of the moon’s surface is visible (half of a full moon). At this point the Earth and moon are in line with one another, facing towards the sun.

The 4th stage of the moon phases is known as a waxing gibbous. At this point in the moon cycle, we can see about 75% of a full moon. The moon is now on the other side of Earth from the sun.

This moon phase doesn’t require much of an explanation. We’re all familiar with a full moon. It’s when 100% of one side of the moon’s surface is visible. It appears as a full circle in the sky and tends to be its brightest as it’s reflecting the most sunlight back to Earth. We see this phase when the Earth is between the moon and the sun.

From Light to Darkness

At the 270-degree mark of the moon cycle, there is now only 50% of the reflected surface visible to us. We sometimes refer to the quarter stages (first and third) as ‘half-moons’. Of course, quarter moon would be more accurate as we only ever see half of the moon, even during a full moon.

The 8th and final stage of the moon cycle is the waning crescent. What we see in the sky is essentially a mirror image of the waxing crescent. In terms of moon stages, this is the last one before we return to another new moon, marking the end of the 27-day cycle.

The full moon is considered the most exciting of the moon phases. It’s when the moon is the brightest, and it would often be viewed as the peak of any moon cycle. The importance of a full moon can be seen by exploring the different terminology for it. For example, have you ever heard of a blue moon?

The calendar we use consists of months that are usually 30 or 31 days long, which means they don’t align with the lunar months of 27 days. As such, a month is longer than a moon cycle, and so once every 33 months (about 2.75 years), we will get two full moons in a single calendar month. The second of these moons is referred to as a ‘blue moon’. However, the first full moon of the month goes by a different name, and this changes throughout the year.