What is the Meaning of the World Tarot Card? 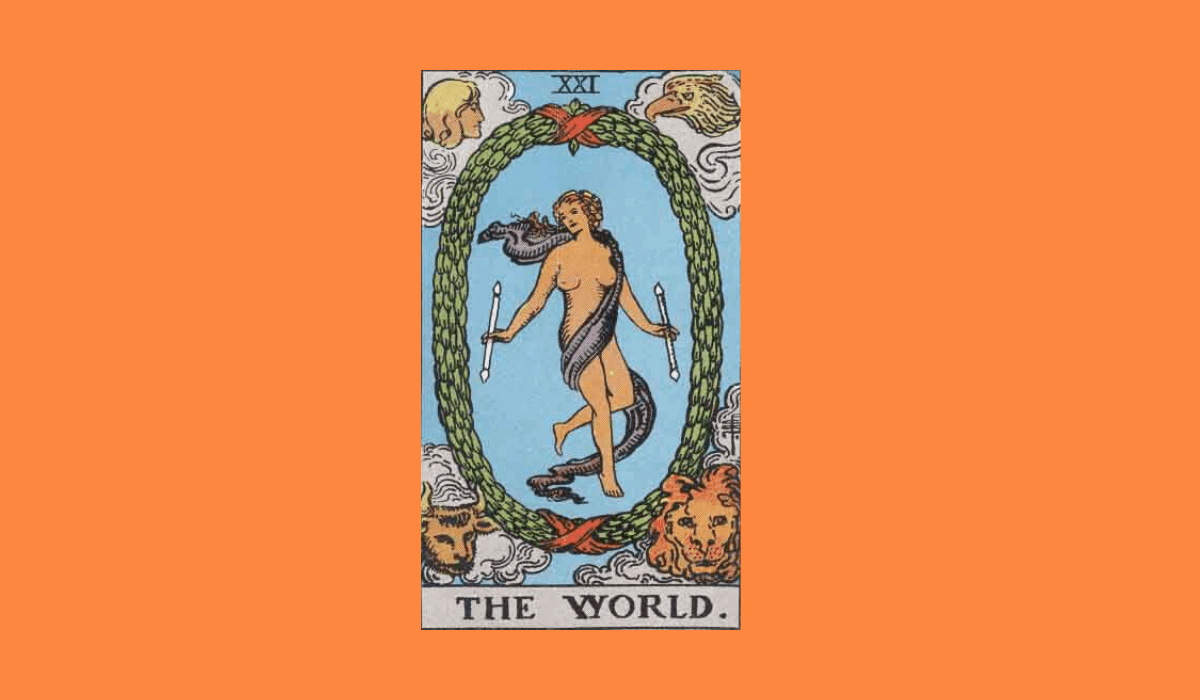 Each card within a Tarot deck is unique, but some are more unique than others. While the Minor Arcana cards resemble suits from a standard playing deck, and are therefore relatively common with one another, each of the Major Arcana cards are completely separate and unique.

The World card is often shown to depict a woman standing in the center of a circle. At each corner is a creature:

These creatures have featured heavily in a variety of cultures, from Hinduism to Ancient Egypt to more modern Western occult traditions. The card represents having the world at your feet.

Within any other context, we would view this as meaning that people admire you, respect you, and acknowledge your success. But within the context of the Tarot, the meaning is a little different.

When the World Tarot card is played upright, it suggests that you’re going to be welcomed, in whatever way that applies to your situation. For many, it’s the idea of being welcomed or invited to take part in new opportunities.

It implies that you’ve already put the work into achieving your goals and desires. More specifically, you have learned the necessary life lessons to progress along your spiritual path.

All that is left is to seize the opportunity. The door is open! All that is left is for you to walk through it. It’s important to be wary though, because as you complete this chapter of your life, you will begin a new one, and each new chapter brings its own set of challenges.

When the World card is played in relation to a question about love or relationships, we find that it carries two messages similar to its more general meaning. For those of you who are single, the World card suggests that you’ve put in the necessary work to overcome personal problems.

You’ve reached a stage where you’re comfortable with yourself and know what you’re looking for, so now is the perfect time to find a romantic partner. This card suggests that taking new opportunities will lead you to your future partner.

For anyone in a relationship, the World Tarot card suggests that you’re nearing an important milestone. The importance of this milestone is personal to you, and so while it might be engagement, marriage, a child, or one of the other traditional options, it could also be something completely unique to your situation.

In a similar way to the other aspects of this card’s meaning, when it comes to your career or your financial situation, there are new opportunities on the way. In terms of your job, you’ve been working hard, pushing for promotion, and everyone that works with you has been noticing the extra effort.

Great things are on the way but be careful not to relax or celebrate just yet. The next few weeks or months are going to be crucial. The message about your finances is similar: you will likely be entering a period of financial prosperity, provided you’re able to remain level-headed and avoid frivolous spending. Be smart with your money and you’ll notice the benefits!

When this card is reversed, the overall meaning shifts from being one of opportunity and recognition of hard work, to stagnation and incomplete goals or objectives. It seems as if you haven’t been putting in the necessary work or you’ve been trying desperately to take shortcuts to avoid having to do any hard work.

However, there is also the possibility that you’ve put in the work, but you’ve focused on the wrong area of life. It’s important to accept that sometimes things don’t work, so don’t try to force something that isn’t happening. Sometimes we have to accept the loss and quit while we’re ahead.

Don’t expect Romeo or Juliet to just show up outside your window. In life, we need to take opportunities in order to start down new paths. So, ask yourself this: have you been seizing opportunities recently, or have you been limiting your life experience?

If you’re in a relationship, you feel like you and your partner have hit a bit of a romantic wall. At times, it can feel like we’ve fallen out of love with someone, but in truth, we’ve simply closed ourselves off.

Ask yourself if communication between the two of you has become limited recently. If so, consider raising this issue with your partner. If you have regular deep and meaningful conversations about the nature of your relationship and nothing changes, consider what has changed that might have caused this.

When the World card is reversed, it can suggest that you’re neglecting your own potential. You’ve reached a plateau as far as your career progression is concerned, and you’re failing to meet the goals that you’ve been setting yourself.

That’s not to say that you aren’t working hard, but sometimes we can work hard at something we don’t fully enjoy or find fulfilling, and ultimately it will begin to feel like a burden, leading to poorer performance.

As far as finances are concerned, the World card serves as a warning. Your finances may be ok now, but don’t take any risks at all, no matter how beneficial the outcomes could be. Keep your spending limited to essentials only.