The Knight of Cups Tarot Card – What does it represents? 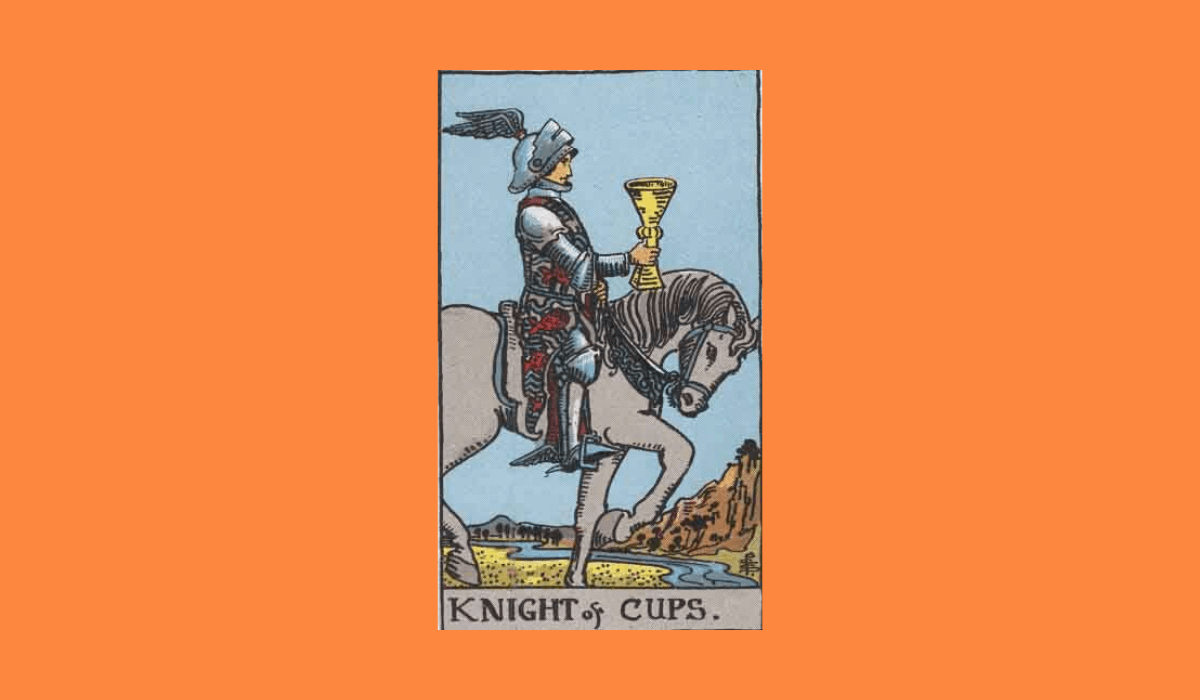 Tarot cards are a powerful spiritual and astrological tool for learning more about our place in the universe. A standard Tarot card deck contains 78 cards: 22 Major Arcana cards and 56 Minor Arcana cards. We’re going to focus on just one card: The Knight of Cups Tarot Card.

Interpretation plays a major role in understanding the meaning behind a Tarot card reading, but this also applies to each individual card as well. We’ll cover the general meaning of the card, before exploring the Knight of Cups reversed meaning as well as the Knight of Cups love and money meanings.

Each tarot card carries a general meaning associated with it. The Knight of Cups Tarot card is often considered to be a messenger, of sorts. When we see this card in an upright position during a reading, it suggests that news, offers, or invitations are coming your way.

The Knight of Cups Tarot card carries a lot of different meanings. If you’re struggling to understand why this card has been played and why it’s important in relation to your spiritual journey, you might benefit from a free reading. Why not apply for one today?

The images depicted on this card often appear rather pompous, like the arrival of a royal message, and that’s because there is good or important news on the way. When you see this card, we can usually assume that you’re being encouraged to seize an opportunity.

It’s very easy to spend time contemplating the pros and cons of any situation, but if you wait too long the moment will pass and the decision will be taken out of your hands.

Much like the gracefulness associated with the card’s imagery, you should try to remain calm under pressure. Instead of overthinking the opportunity presented to you, just take a leap of faith.

We live to regret the times that anxieties or fear forced us to say no to something exciting or opportune. We can see how this general meaning applies to more specific aspects of the card, such as love.

When it comes to love, romance, and relationships, this card’s interpretation is generally seen as good news. It suggests that an opportunity is going to present itself to take your relationship to a new level.

For those of you in relatively recent relationships, this might be something like meeting your partner’s parents, saying you love each other or discussing the possibility of moving in together.

If your relationship is less recent, it could be that a discussion about marriage, having children, moving somewhere new, or reigniting lost passions is coming your way. You have a chance to grow with your partner and cross a new milestone together.

If you’re single, you’ll be happy to hear that there is good news for you as well. Somebody will be entering your life shortly who will make your heart thump. It’s also possible that this person is already in your life, but up until now, you’ve just been friends.

One moment is all it takes to see somebody in a completely new light. If you’re already interested in someone, then this card is an indication that you should seize the day and express your feelings.

The good news associated with this card continues as we explore the world of finances. This can cover anything from:

It seems that an unexpected opportunity is going to present itself to you in the near future. It’s important to remember that new opportunities don’t always appear as we might imagine them, so don’t be afraid to face challenges, as you may just find that the secret chest is hidden down that path.

One example of this comes in the way you face problems at work. This card can indicate that you’re not using creativity as often as you perhaps should. Consider why you may be holding back: are you worried about failing? Are you concerned that others might judge you?

Solving a problem in a creative manner can allow others to appreciate your unique talent, so don’t hold back. You should also pay attention to the problems impacting other people. It might be that your mind can see a solution that theirs can’t.

In a more general sense, this card also suggests that good fortune is coming your way. You’re still being advised to avoid incredibly risky endeavors, but you also shouldn’t allow fear to hold you back and make your decisions for you. Find a healthy balance between the two in order to maximize your personal success.

As with most Tarot cards, when this card is played in reverse, it usually embodies the opposite meanings that we’ve just discussed.

In a long term perspective

We often perceive reversed cards as being negative, but they can ultimately lead to positive outcomes or growth through challenges. This is most apparent when we consider the opportunity and invitation aspect of this card’s meaning.

When reversed, this card suggests that an invitation will be revoked, or an opportunity will fade away. You’re going to feel disappointment and possibly even betrayal. However, you have to focus on the big picture: this change is out of your control, so your destiny may have something else in store.

In terms of love, the reversed version of this card doesn’t indicate anything positive. It seems that your partner might suddenly have a change of heart. It could be that they have fallen out of love, or maybe they just aren’t ready to commit by taking the next step, but one way or another, you’re not going to feel encouraged by their decision.

If you’re single, your path doesn’t shine much brighter. It seems that if you’re attracted to someone currently, they don’t return your affections.

The paths of love

If you’re single and hoping to find love, you should be on-guard when entering a relationship in the future. You may find yourself facing one of the problems described above, or you might find love, only for destiny to lead you both down separate paths.

Just remember that something which seems wholly negative in the present may appear positive when reflected on in the future. We never know how any act or decision will change our lives.