What is the Meaning of the Queen of Swords Card? 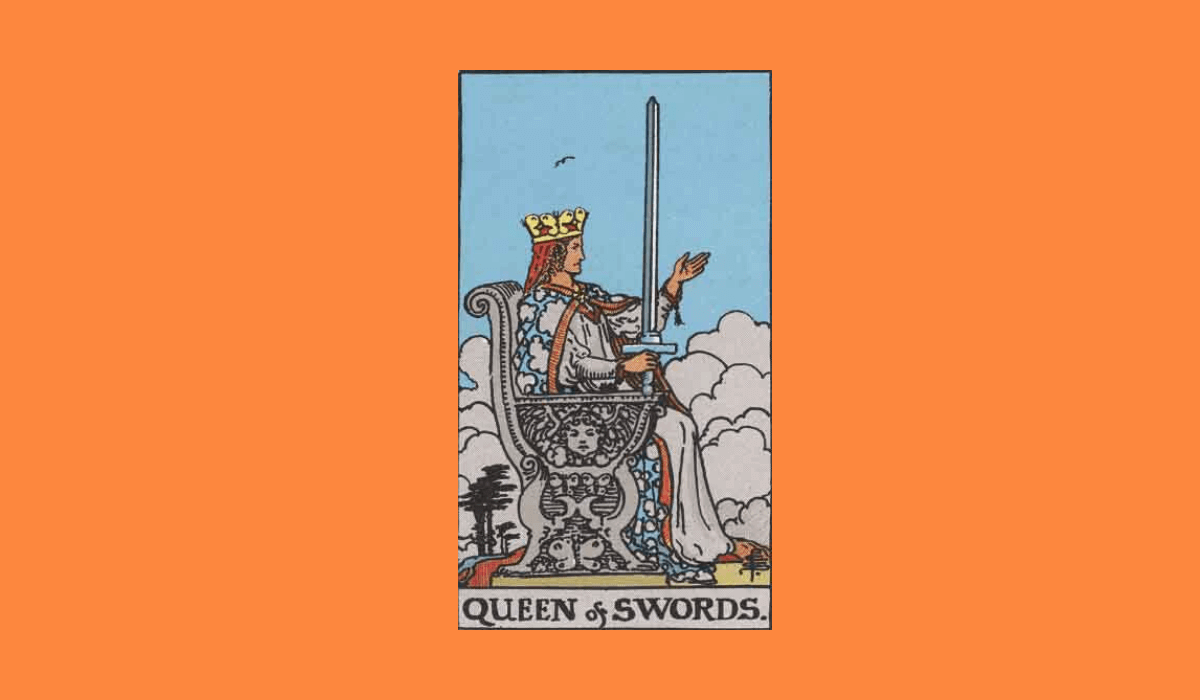 Before you can begin to perform Tarot card readings, you need to have at least a basic understanding of what each card means. Intuition plays an important role in all readings, but each card still carries a base message that helps to guide us to deep understandings of our role in the universe. We’re going to focus on just one card: The Queens of Swords Tarot card.

We’ll begin by exploring the general meaning of this card before looking at what the card says about love and relationships, career and money, and the queens of swords reversed meaning.

The image depicted on this card is often a Queen sitting on a silver throne with her sword raised into the air as she waves or ushers at an unseen person. The card holds two general meanings.

The first relates to the idea of an older woman in your life. This woman could be seen as a mother figure, of sorts, and while she may not hold a position of authority, she is strong-willed, determined, and confident.

This woman will step in to help you during a time of vulnerability. She may not protect you in a physical sense, but she will provide some much-needed support.

The second general meaning of the queens of swords relates to reality. Sometimes, we allow our perceptions of the world and other people to distort the truth, often without us realizing it.

This card suggests that we need to look through the fog in order to find the truth.

Somebody may offer you or your work criticism in the near future, and while you may find a way to divert responsibility aware from yourself, you would do well to listen to the criticism. Use it to improve yourself!

When it comes to love and relationships, the queens of swords indicates that if you’re single, you’re going to find a partner who matches the person described above:

This person may be male or female, but they will possess a feminine energy. This person will be direct and honest but won’t wear their emotions on their sleeve.

Previous experiences with dating and relationships have left them walled-off and cautious. Don’t view this in a negative light though, as this partner will be extremely loyal and will deeply appreciate everything you do for them.

For some, having time to recharge is just a necessary part of life, and if you suffocate them with affection, you’ll make them feel trapped and claustrophobic.

Such a partner will often miss being independent, and so for the relationship to remain healthy and functional, you have to allow your partner a freedom that may feel counterintuitive within a relationship.

Just let them know that you’re there to support them in whatever way they need.

Before we look at the queens of swords reversed meaning, we need to consider what this card indicates in relation to your career.

It suggests that a powerful woman in your place of work will offer you advice or criticism and you would do well to listen to whatever she has to say.

Her honesty is what people respect about her, and you would do well to follow the example she leads. Be honest with those you work with, even when the truth isn’t what they wish to hear.

The only way others can improve is through hearing realistic views of them and their work. When it comes to your finances, this card suggests that someone is going to offer you sound financial advice in the near future.

You should always think for yourself, no matter who gives you advice or about what, but this person certainly doesn’t intend to lead you down an unpleasant path.

You will also find that your natural skills will lead to an opportunity to make further investments, so don’t shy away from the world.

Much like the general meaning of this card, the queens of swords reversed meaning also focusses on two points. The first is that you’re going to fail to learn from the mistakes of your past.

This might mean that you’re holding onto past decision, and much like an anchor, it’s weighing you down and stopping you from moving forward. Seeing other people progress in their lives while you remain stuck simply adds to your frustrations.

It’s important to look deep within ourselves in order to discover if we’re the source of our own pain. The second aspect of the reversed meaning is that an older woman is the cause of your pain.

As this is a mother-figure, it is possible that this person is related to you. They are spreading false rumors about you or giving you bad advice in order to lead you astray.

It’s important to remember that there are no bad Tarot cards. Even those that seem negative serve as warnings so that we can focus on the best outcome in any situation.

Leaving Space for the Other

When it comes to love, the reversed meaning of this card suggests that your partner is missing freedom so much that they may just head out into the world and take it.

This could mean that they will cheat, but it might simply mean that they’ll lie in order to get what they want. For those of you who are single, this card suggests that if you meet a strong-willed, independent woman in the near future, she won’t be a good match for you.

The Image you are Projecting

At work, this card suggests that you may be coming across in a negative light. This could be down to communication issues, which may be making you seem pessimistic or even rude.

Try to pay attention to how you speak to others. This card also indicates that you’re going to be given bad advice, but it’s going to seem too good to turn down, so be careful.