The Many Faces of the Arcana 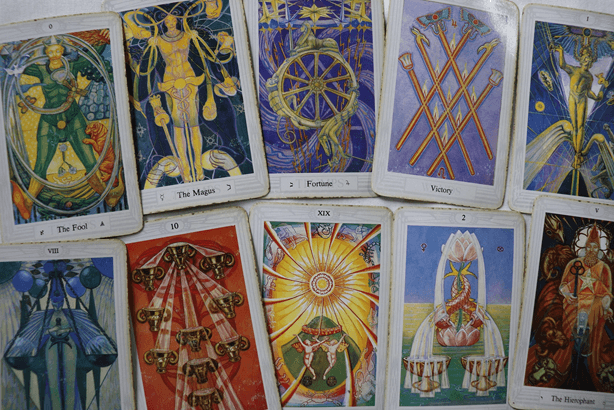 The evolution of the arcana Tarot Cards through history is undeniable. However, no matter how many changes there are, the essence of these cards remains. They represent all the movements in our spiritual journey, our solid ground, or the projection of the life that we dream of.

In a sense, the arcana Cards are an infinite source of guidance and inspiration to all of us. Whether you are an expert or a beginner in the Tarot, you will see that a single card can help you reflect on your reactions, your habits, your views, and the people that surround you.

Within a standard tarot deck, there are two types of cards: the major arcana and the minor arcana.  The first is composed of a series of unique characters, while the other is more conventional, with the elements of the cards that you can use to play games like poker or bridge, such as suits of Cups (or Hearts), Swords (or Spades), Wands (or Clubs), and Coins (or Diamonds).

So, as you can see, the difference between one and the other is obvious. You will need both to receive a complete reading. It is the combination of the major and the minor arcana that bring a new dimension to the message that the cards are trying to tell you.

A Universe in a Simple Deck

In total, there are 78 cards in a tarot deck. 22 major arcana and 56 minor arcana. Among the major, you will find cards like The Fool, The Lovers, The Sun, The Empress, The Hermit, The Star, or The Hanged Man.

If you look closely, there is no doubt about the logic relation between each card, even though, and this is part of the greatness of the arcana, the nature of a card can be completely different from other cards.

Or there are also defined characters, like The Magician, The Emperor, or The High Priestess.

Exploring the Meaning of the Arcana

Just like you cannot judge a book by its cover, you should avoid jumping to conclusions when you see a card coming out of a deck. It is true that there are cards that are associated with a certain meaning. But there are other factors that play a role in a tarot reading.

Your experiences and the things that you are going through should never be left aside when you are trying to summon the global meaning of the cards. Remember that the main objective of the draw is to serve as a reflection of our lives and the projection of life that we want to achieve.

Whether you are looking to answer questions about your past, your present, or your future, the meaning of each arcana is connected to us.

More About the Major and the Minor

Another point to take into account is the balance between the major and the minor arcana. They differ in appearance, but there are other important aspects in which it is necessary to make the distinction between one and the other.

The minor arcana focusses mainly on the daily aspects of life. It is more about the details and how to face problems by making small decisions. The major arcana, on the other hand, is more about a wider look at your life. These cards can unveil possibilities that we didn’t even contemplate and warn us about a greater danger.

This said it is pointless to decide which arcana is the most important since our happiness is connected to big things, but also the small things.

In this sense, it is fundamental to keep something in mind. You should not force or wish for a card to come or not to come out on a draw. One should let the cards flow and accept them as they come.

Of course, sometimes you come to a reading with a specific question, or there is something in your life that interests you more. There is no problem with this. But the better you accept the outcome, the clearer you will see the answers.

As you know, nothing in the tarot is left at random. The direction in which the card comes out of the deck matters. Just like the order in which they come out is important for interpreting the cards, the directions are also very relevant. It is not the same to see a card that is upright than another one that is reversed.

Usually, the meaning of the reversed cards is connected to aspects of ourselves that we need to work on. It is not about pointing out what we are doing wrong, but about finding where there is room for improvement.

This is the reason why you shouldn’t fear a reversed card or see it as something negative. The fact is that often, a reversed card can show us areas or habits in which we are stuck. The idea is to come out of this vicious circle and use our efforts to continue in our quest. It is the safest path to our better selves.

Discover other interesting articles from Christin: