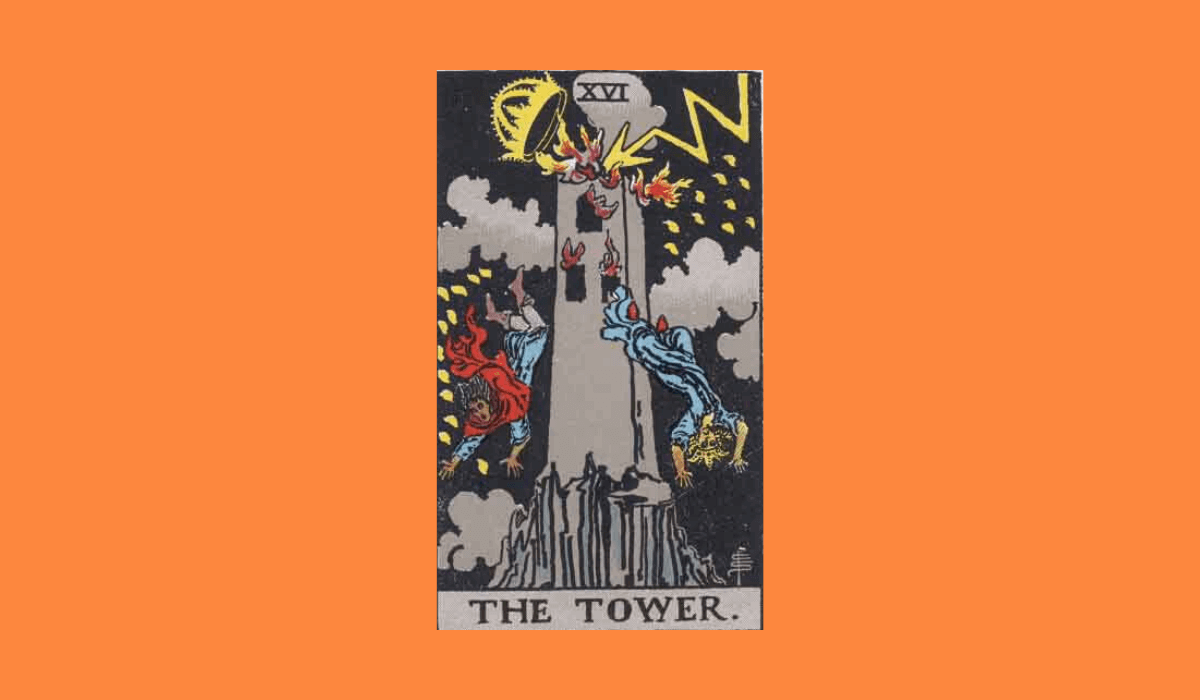 There is no doubt that the first sight of the Tower tarot card is completely shocking. It seems to be taken out of a nightmare. And if you compare it with other “undesired” cards, like Death or the Devil, this card is more tragic.

But remember, appearances in tarot are misleading. You might think that you had bad luck drawing this card when it can be a good sign. The tower can bring you the change you have been waiting for.

And it will be something that will happen suddenly, like a revolution in your life. It will be so sudden that you will need time to process everything that happened.  It can catch you off guard, but it can also be surprisingly rewarding.

However, there is also an element of chaos with this card. Suddenly, you can find yourself in situations that can easily get out of control. You won’t know what will hit you, but you have to prepare for annoying circumstances.

On another level, the Tower tarot can also be a kind of revelation. There could be a discovery that will start a process inside of you. A process that will redefine your convictions, as if you were going through a domino effect.

There are so many things happening on this card that it is hard to determine where to start. Considering the name, we can begin with the tower. The tower on this card is a reference to the Tower of Babel.

As in the tale of the Bible, an air of turmoil surrounds the Tower tarot card. It is all confusion and uncertainty. Even the place where the tower was built gives the impression of instability.

The tower is placed on top of a rocky mountain, almost above the clouds. Even though it is built robustly, there is an element of fragility that makes it most likely to collapse. This is a sign of how false premises are the worst basis to achieve something big and relevant for you.

Of course, the persons that build the Tower thought that it was indestructible. However, it only took a struck of lightning to create total chaos. The lighting on the Tower tarot card is a sign of an event that triggers an important revelation.

It is not a coincidence that the element of this card is Fire. As we can see inside the tower and on the roof, there are flames everywhere. The impact of the lighting is so hard that we see a big crown of the top knocked down.

This golden crown represents the crown chakra and is a clear reference to the energy that flows down from the universe.

But perhaps the most impactive image of the card are the two persons that jumped from the burning windows. It is easy to imagine the state of desperation that they went through to make the decision of preferring the fall instead of the flames.

The fall, in this case, can be a metaphor for what we don’t need. Especially in situations in which we are so absorbed by our problems, that we would do anything to escape from them without thinking about the consequences. It can be for better or for worse.

Concerning the number, the Tower has the number sixteen on the series of the Major Arcana. Also, the planet connected to this card is Mars.

There are two ways to perceive this card when you see it on a draw. First, you can focus on the negative aspects. Or second, you can at least have the hope that something good will come out of all the calamities.

But one way or another, you have to buckle your seat belt because the Tower will take you for a bumpy ride. This card deals with unexpected changes and difficult situations. It can be about a breakup or losing a job. Something significant.

This card also refers to revelations. A situation or an event can make you see things clearer. It can be that you were refusing to see the truth or that there was something that changes your perception.

The positive side of the outcome of this card is an invitation to transform yourself.

You can consider it as an opportunity. It will help you to reorganize your priorities and to give more value to the important things in life. Perhaps you will see that you were wasting so much energy on a vicious circle.

You are perfectly aware of your situation and want to cut the bad habits that are slowing you down. You are putting into question the pillars of your existence. This can lead to a spiritual awakening, a new path to enlightenment.

But sometimes, the reversed Tower can also mean that you are resisting this change. You are holding to something that is causing you more distress than happiness.

And while doing this, you are blocking the space for the renewing energy to enter into your life.

However, you must understand that your attitude is perfectly understandable since one of the meanings linked to this card is the fear of suffering. In this case, you must think about the meaning of sacrifice.

If we want things to change, we need to take risks, even if we may lose something very dear to us.