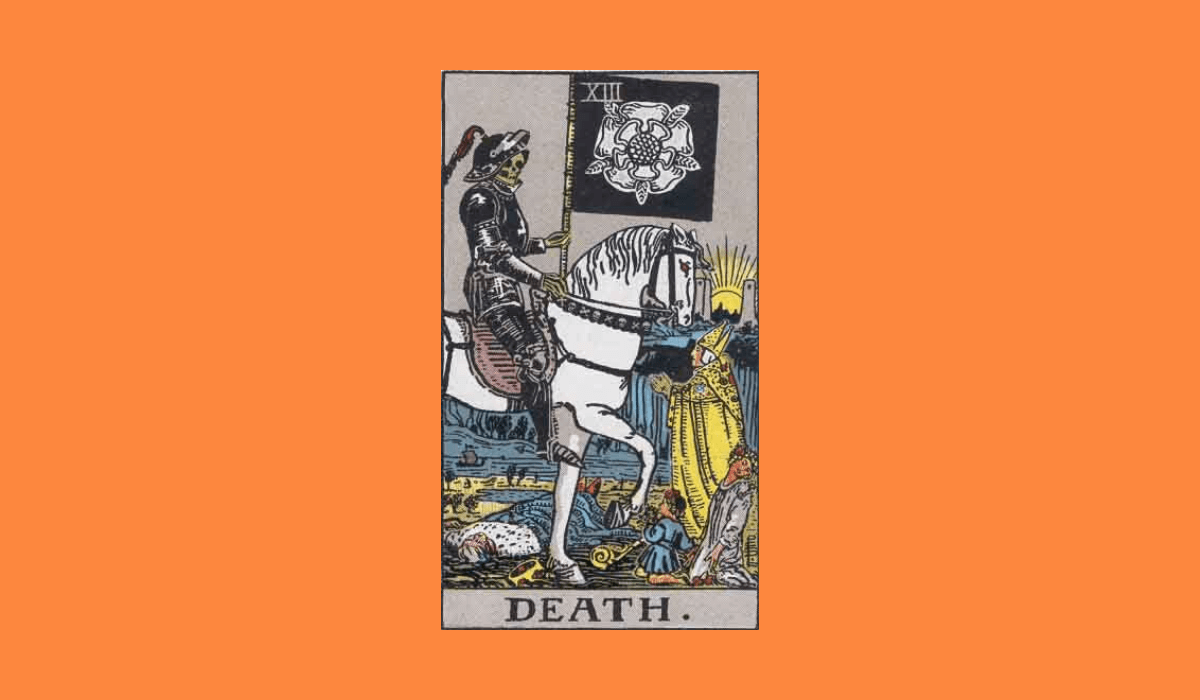 The first reaction associated with the Death Tarot Card is fear. However, it is better not to take the name of this card literally.

This card doesn’t mean physical death or that a tragedy will happen. It is more related to evolution and starting a new life. This card announces the end of a cycle.

In a spiritual sense, this card tells us that the right moment has come to try to connect with your higher self. When you look inside of you, you will discover many qualities that you didn’t even know that you possess.

Discovering these inner qualities will show you a higher path in which you will be able to find your true self. And at the same time, a new beginning. The Death card focusses on:

That is why the meaning of this card can be mostly considered as positive despite its gloomy appearance.

On this card, we can see a knight with black armor. But he is not a normal knight. Underneath his armor, we can clearly see the skull and the bones of his hands.

He is riding a white horse and carrying a black standard with a white rose. The rose is a symbol of beauty and immortality. It has five petals. The reason for this is that five is the number linked to changes.

Compare with the other characters on the Death tarot, the knight and the horse are huge. The size can be a symbol of strength but also a reference to his state of mind after a victory.

On the other hand, the color white of the horse represents purity.

In a more metaphysical level, the size can be related to the perception of reality. I always had the impression that the bishop, the young lady, and the child are not fully aware of who they have in front.

They probably see something different, or death presents itself with a different appearance. That is why they are not completely scared of death. Actually, they kneeled before the knight as a recognition that he has control of their future.

Altogether, there is a certain air of destruction surrounding the Death tarot card. Lying on the dirt, we can see the figure of a defeated king. He has lost his life and also his crown, that is now for someone else to claim. Perhaps, Death.

The figure of the king symbolizes the past: the old order that will soon be replaced by the new. Adapting to these new conditions is part of the lesson of the Death tarot card.

Concerning the astrological traits of the card, Scorpio is the ruling sign, and water is the element related to the Death card tarot.

In fact, we see a lot of water behind: on the small lake, on the waterfall, and the river. Also, the number of the card is the thirteen, as we can see on the top.

Finally, another particularity of this card is the two towers and the setting sun that we see on the background.

These are elements that we see again in another card of the major arcana but from another perspective. The name of the card is the Moon.

Death announces the end of a significant phase in your life. A phase that was really important for you, but that due to your evolution and the mental state in which you are, need to make space for a new. It is like closing a chapter to start a new one.

With the death card, it is important to concentrate on what is coming ahead. It is time to stop focusing on the past. Even if this requires extreme measures, this is the only way to get rid of old habits.

Let the new energy in and the old out. If possible, reinvent yourself and try things that you were afraid to try before. Think about the image that you want to project and stay true to yourself.

There is so much that you can embrace. The potential is inside of you. You just need to make sure to know what you want and how to achieve it.

When you have Death reversed, this is a sign that you have a problem to let go. You are reluctant to change, mainly because you are not completely sure of the consequences. Perhaps you think that it is not worth it to put everything at risk.

But at the same time, something inside you is telling you that this change is necessary. And that sooner or later you will reach a point of no return.

This is one interpretation. The other is related to old relationships. Death reversed can also mean that you will get closer to someone from your past. Someone that you probably stop having contact with, for different reasons.

This card opens the door to retake this relationship and bring it to a new level. Especially since both of you are more mature and have gone through many fulfilling experiences.

In terms of love, the upright Death tarot card can mean that you are stuck on a relationship that is taking you nowhere. Or you do something to change the monotony, or you better start looking for something new.

You need to see love form a different angle. If you don’t, you may have the risk of putting in jeopardy your own individuality.

On the other hand, the Death card love tarot can also indicate a positive transformation. It can refer to a big change in your relationship, like an engagement or another kind of proposal, for example.

In the case that you are not in a relationship, this card can help you build the basis to start long-lasting and healthier relationships. Death tarot will put you in contact with a more mature and careful part of yourself.