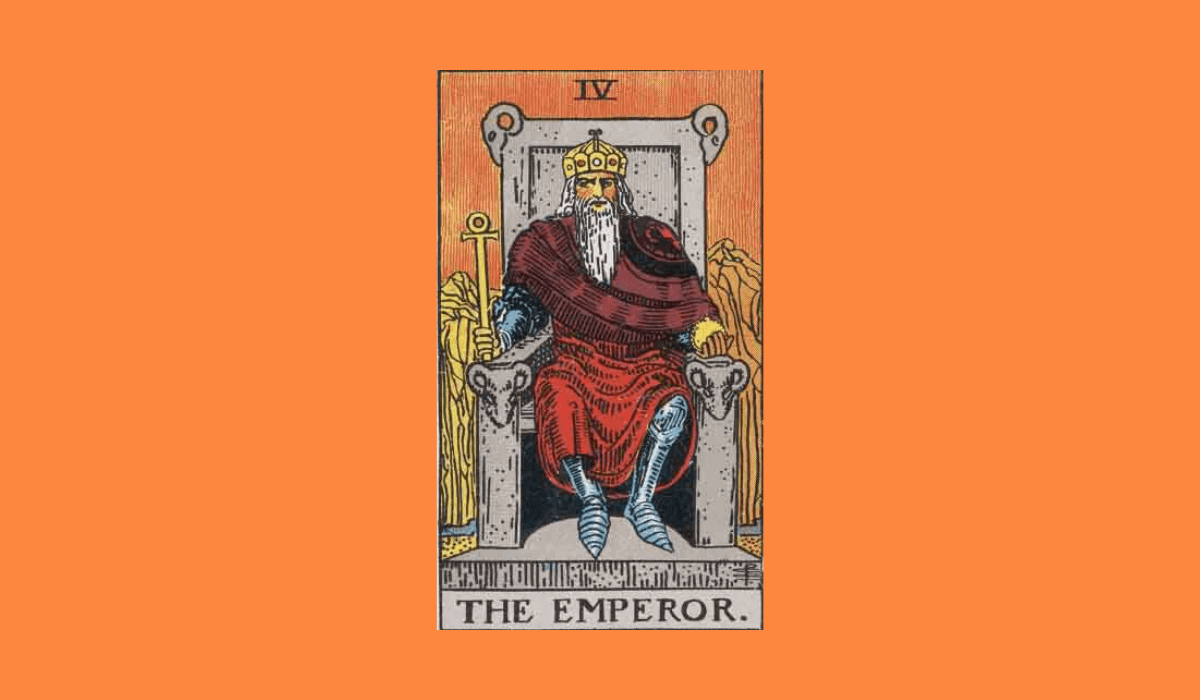 As a symbol of power and authority, the Emperor tarot card gathers all the good qualities that a good ruler should have. Seeing this card during a reading can be interpreted in several ways. If the Emperor is related to someone in your life, it will be referring to a father figure who can bring a bit of structure in your life.

If the card is directly related to you, it is time for you to optimize your leadership skills because you will need them soon.

In the case that you think that you are not ready or that you lack the experience. Don’t worry, the Emperor will show you the way.

Sitting on a throne that seems like carved in stone, the Emperor observes us with a challenging look. A look in which he expresses all of his authority. He sits:

The fact that he appears with a long beard and grey hair is a symbol of his large experience as a power figure. Time and wisdom have taken him into a position in which he is capable of making an important decision for those that recognize him as their ruler.

The Emperor tarot has the roman number four on the top. This number is also present on this card, with the four ram heads that decorate the throne.

The rams head is a clear reference to Aries, the zodiac sign of the Emperor. This is no coincidence since Aries are born leaders. The rams also serve to expose the connection between this card and the planet Mars.

On the right hand, he holds an Egyptian symbol called the ankh, that may look like a strange cross but with a loop on the top. This is the symbol of life, according to the ancient Egyptians.

On the left, we can see an orb that represents the world that he rules over. The red robe represents passion, power, and lots of energy.

Beneath the robe, we can see a suit of armor to protect him from danger and to isolate himself from any kind of emotion that can maybe make him seen vulnerable.

Parallel with the Empress

When you analyze the Emperor tarot card with the Empress, you see many details that point out a relationship between both cards.

Not only because of the name but also in other aspects. It is the truth that there are many differences between one and the other. But the truth is that both cards complement each other.

If the Empress is a card that celebrates the unstoppable force of divine femininity, the Emperor connects to many male stereotypes. That is why we can say that this card is a clear reference for masculinity.

Concerning the background, if you compare it to the background of the Empress (that is full of nature), you will only find hardness and desolation. That is because the solid mountains behind him are a symbol of his toughness, determination, and ambition to achieve much more.

But these barren mountains can also be a sign of how difficult it can sometimes be to connect with the Emperor. As if he were impenetrable.

In a sense, the Emperor is a father figure, which is the perfect complement to the Empress, which is often associated with motherhood.

If you are looking for more structure in your life, the Emperor tarot card is exactly what you have been praying for. This card represents a change in perspective towards how you were trying to achieve your goals.

It introduces a sense of organization and methodology in your habits.

Basically, what the Emperor is trying to tell you is to be prepared and aware of the responsibilities that you have. People are counting on you, and you have the ability not to disappoint them.

A good plan or a good strategy is sometimes enough to implement your decisions.

An upright Emperor can also be a reference to someone that you perceive as an authority figure or even a father figure. This card contains all the values of fatherliness, of someone that looks after you.

Sometimes you can feel that this person is a little bit hard with you because of the authoritative nature of this person, but you can rest assured that it is all for the common good.

On the other hand, the Emperor reversed can be an indicator of someone abusing of their power. Or that are trying to assume responsibilities that are out of their scope.

They lack the ability to control themselves when things go out of their hand or show a lack of preparation that normally leads to improvisation.

The Emperor reversed can also be a warning that you are ignoring your abilities as a leader.

Even if someone needs to assume this role and that you have the skills for it, the fear of having the others perceiving you as an authoritative figure prevents you from taking the step forward.

Relationships are always a struggle of power between two persons. Who is stronger? Who is weaker? Which is the one that makes the important decisions?

But love should not be perceived as a competition.

The Emperor in a tarot love reading is a symbol of working toward a common goal and investing more time in your relationship.

Add more structure, logic, and romance so that you can have your own space as individuals and really enjoy the time that you are together.

If you are not in a relationship at the moment or are tired of the monotony of your relationship, this card can mean that someone more mature and with a lot of experience will come into your life.

Someone from which you will feel complete admiration. But remember, just like the Emperor tarot card, this person will have difficulties showing their true feelings.