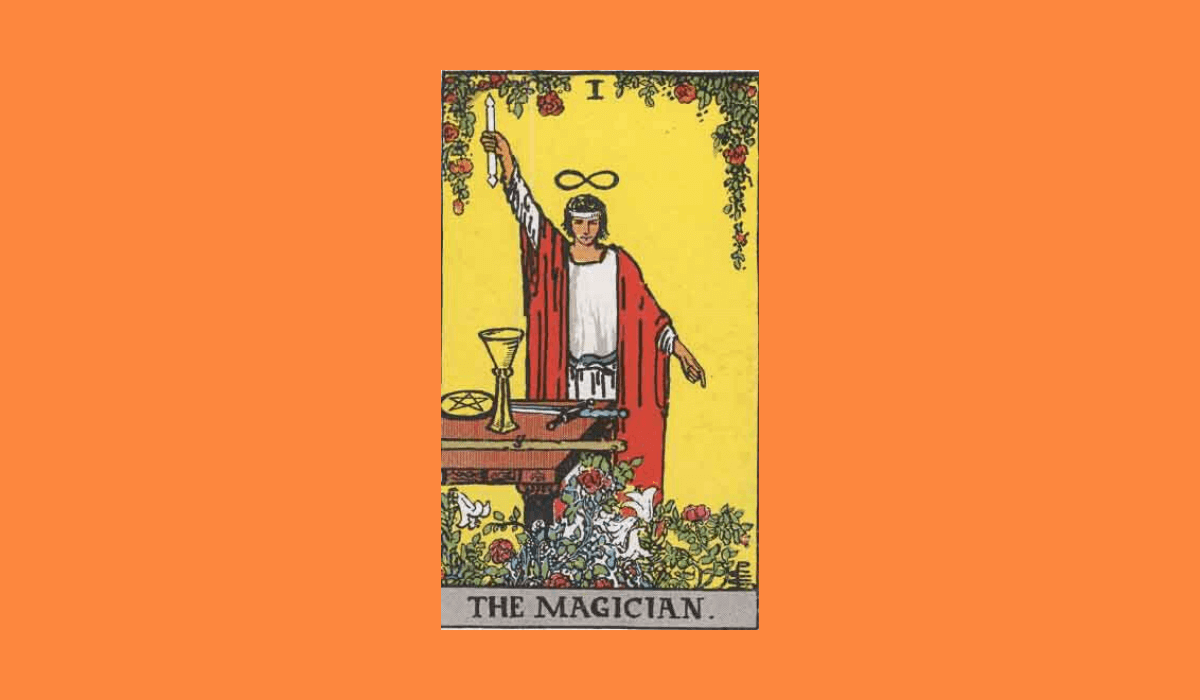 If we consider the figures of the tarot as pieces of a story, the Magician tarot is the first contact with wisdom. Making things happen, the Magician gives us other choices and paths that we never noticed before.

With this card, we are no longer prisoners of our reality, but we will be able to choose where we want to go next in terms of the direction that is more beneficial for us.

Before starting with the description of the card, let’s stop a bit on the figure of the Magician. Since the beginning of history, the sorcerer and the Magician were symbols of knowledge and wisdom.

Their figure was well respected, and almost every court had one of them. They were also highly regarded for their healing abilities and the influence they had over the person on the throne. Sometimes as a kind of teacher or tutor to the ruler.

That is why it is no coincidence that the number of this card is One. At first sight, you can feel the power and confidence of the Major Arcana.

There are many theories to where the hands are pointing. Some say heaven and earth; others see it as a metaphor for the spiritual and physical world. As a matter of fact, the Magician tarot card is a bridge between both.

It puts us in contact with our higher selves and keeps our feet on the ground.

More Elements about the Magician

Looking closely, you will see a kind of aura above his head. This symbol is commonly known as the symbol of infinity. But this is not the only symbol. The belt that the Magician is wearing shows a snake biting his own tail.

This is a symbol of eternity. On the table, we see the four suits of the Minor Arcana.

The cups relate with the emotions, the pentacles are practical choices, while the wands are more on a spiritual level, and the swords are related to the logic. Needless to say, the Magician is in control of all of them.

Considering all these elements, it is inevitable to come across the question of what is real and what is not? Sometimes the Magician tarot card is perceived as an illusionist with the ability to make us believe something that is not really there.

Helping us to find a solution is the primary task of this card. The lesson that we can extract from the Magician tarot card is that there is another approach. You have to try all the alternatives before giving in.

The idea is to teach us how to discover new resources and solutions, rather than settling for something that we will not be satisfied with.

As an archetype, the upright Magician stands for someone full of confidence that is ready to take us under his wing. Someone that we will feel inspired with, and that has all kinds of resources and skills to guide us to our goals.

If we look beyond what our eyes are telling us, you can associate the suits on the workbench (the table) with the four elements: earth (physical), fire (spiritual), water (emotional), and air (mental). Combining all these elements is the best trick of a true alchemist.

But first of all, it is important to know where to focus all your efforts. Before starting something, make sure that you will carry with it until the end. It will be a pity if you waste all you have work because of pointless distractions.

Set yourself a plan and follow the progression so that you can see how close you are to achieving your objectives.

In the case that the card appears reversed, it can be interpreted as a kind of unbalance of illness that affects the mind. But don’t be alarm by this. It is not something serious, a simple headache or symptoms that are trying to tell you that you need a rest.

The other meanings surrounding the magician reversed are related to the shadow of a doubt that is stopping you from progressing. You should try not to be stuck on exploring your options if this prevents you from acting. From time to time, improvisation can be more effective.

On another level, the reversed magician tarot card can alert from the risk that someone is trying to manipulate you. You have to be really aware of this. Valorize the intentions behind some of the persons that are trying to increase their influence over you.

The Magician in Love

Generally, this card is positive in terms of love. It shows a strong relationship between two persons that connect with their minds. It goes beyond the intellectual level, more to a situation where they share the same points of view and go after similar objectives. In the end, it is all about complementing one another.

The influence of the Magician tarot card in love is related to the idea that we have of love. In a sense, the Magician is definitively someone that will leave a mark on you, and that can get so close to you that you can catch yourself from time to time, acting like this person.

The only risk with this is that the Magician can turn out to be a little consuming because of its strong personality and confidence. Remember to leave a space for yourself, if necessary.

No matter how much admiration you feel for the personality of the other person, your identity is an important part of you, and to fight to keep it at the same level, is part of the reason why there is so much chemistry between both of you.

Discover other interesting articles from Christin: