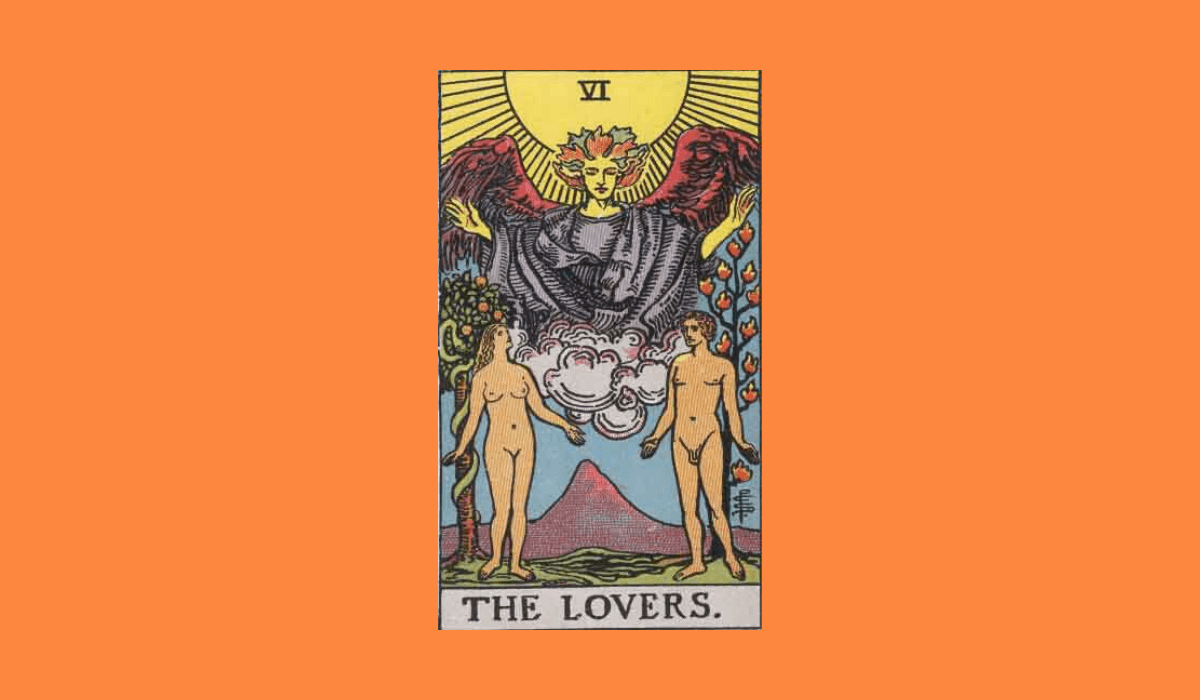 Is this card only about love? Or are the lovers also a card that can help you outside relationships? The answer is yes, and no. The card is mostly about subjects of the heart.  But there are also elements of communication, or about how we interact with people close to us.

The Lovers tarot card also focuses on the aspects that are positive or negative on a relationship.  Not only on a romantic level but also in terms of understanding and sharing a life together. However, the meaning of this card depends mainly on the context of your life at the moment.

At a first glimpse, it is clear that this card is based on the characters of Adam and Eve.  There are several references to the most famous human characters of the Genesis.

In this card, we see a man and a woman, naked, without any clothes. Even without a leaf that covers its private parts. But nudity here is not necessarily about something sexual. It can be more about vulnerability or facing reality.

We have to remember that when Adam and Eve were expelled from Paradise, they were shocked when they realized that they were naked. They were not conscious of this. So, this is something we have to take in mind when we try to interpret the meaning of e Lovers.

Based on the trees, we can assume that the place that the card is referring is the Garden of Eden. Behind the woman, we have the tree of the forbidden fruit, with a snake crawling through the leaves. This tree is a symbol of temptation and the sins of the flesh.

This is one interpretation. The other is that the tree with the apples is the tree of knowledge. It is the tree that helps you recognize between good and evil.

Behind the man, there is a three in flames. These flames represent passion and the constant obsession of men with desire. If we count the flames, we can see that there are about 12 of them. Each, for every zodiac sign, there is.

This is card number six of the Major Arcana. The number of this card can be seen inside the big sun on the top in roman numbers.

Between the man and the woman, we can see a volcano. This is a clear reference to passion and desire, as the volcano is related to heat and eruption. The eruption of passion that two people feel when they are together.

The third figure on this card is an angel. This is no ordinary angel, in fact, the angel that we see is Raphael. The meaning of the name of this angel is “God heals,” and he is one of the most famous archangels.

The presence of Raphael on the Lovers tarot card is also associated with the air element. Raphael is the angel of air, which is also the element of the zodiac sign of this card: Gemini.

In terms of design, this card has some similarities with the Devil card. Even though the Lovers card is the complete opposite. In one card, day rules, while in the Devil, all is darkness.

The parallels between both cards are in the disposition of the three characters. On the Devil, Lucifer takes the position of Raphael, with bat wings instead of angel’s wings. And below, we see a man and a woman, that are already prisoners of evil. If you put them together, they seem very familiar.

This card is all about connecting with others. It is a card that involves a high level of communication and a lot of sincerity. It is about being truthful and can talk openly with the other person without hurting the feelings of the other.

The nakedness of the man and the woman shows a state of vulnerability. But it is also while confronting our fears and receiving the support of the other, that we can live a rich love life. Trust and respect are the basis of a healthy relationship.

The big lessons that we can learn from Lovers tarot is about the power of complementing one another. Union is a strong force, and two persons rowing in the same direction can make them inseparable.

The Lovers reversed on the other hand, focus on the part of your relationship that is not working. Sometimes we put too much pressure on ourselves that we start creating conflict situations that are not good for anyone.

Something is failing and instead of solving it, we are making it worse. No matter how hard you try, the communications is definitively not flowing.

When this card appears on a draw, it can also mean that the feeling that someone has in a relationship are not mutual the other person is not feeling the same. There is probably a lack of balance or something that is preventing the other to open their heart. Maybe fear or mistrust.

Finally, the Lovers reversed is an indicator that our desires have driven us to take wrong decisions. We are more focus to pleasure than to reason. And this can be very toxic for us.