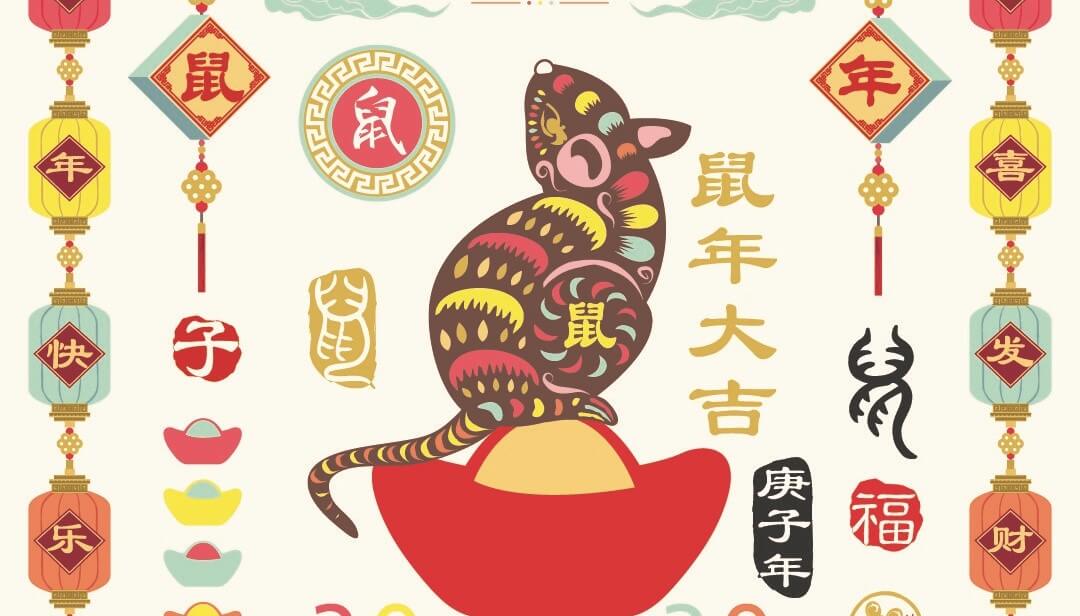 A cycle was closed in 2019 and now it is the beginning of a new one with the Year of the Rat. Just like  Aries is the first Zodiac sign, the Rat is the first animal in the Chinese zodiac, which is composed of 12 signs, all of them represented by a different animal that plays an important role in Buddhism.

According to popular belief in China, the Rat is an animal associated with abundance and fortune, due to its quick reproduction rate, which makes 2020 a perfect year to slowly increase or multiply your wealth. Another of the Rat’s traits is its power of persuasion.

Someone born under this sign has the ability to convince anyone, due to their irresistible natural charm. On the other hand, people of the Rat sign are also well known in Chinese tradition for their special social skills, which makes them able to adapt to all kinds of environments and interact with almost everyone, no matter if it is someone with a completely different view of life than them.

How the Year of the Rat will unfold

Even if you don’t expect it, the Year of the Rat will be a year of big changes. The beginning of the Chinese New Year, which will start on January 25th, will open the door for many new events that could turn your life around.

A change of house or apartment is a strong possibility, not only within the same city, it can also be abroad. The important thing is not to discard this option since it could lead to amazing experiences and could help you to close difficult chapters in your life.

Try to remember that success is high during this year for all those personal projects that you have long been waiting to see come to fruition. In this sense, if you started in the previous year to invest some efforts in this direction, you will surely see big advancements in 2020.

Whatever you planted in the Year of the Pig, 2019, it will take more shape in the Year of the Rat.  But don’t get too confident in seeing a reward if you stop focusing your efforts on giving continuity to all the hard work. Because there is nothing worse than falling into laziness.

Among the peculiarities associated with this New Chinese Year, apart from the animal, there are other things to consider, like the earthly branch (which this year will be Zi), the Ying Yang (which will be Yang), the celestial stem (which will be gēng) and the element, which Chinese astrology divides into 5: wood, fire, earth, metal, and water. In 2020 the element will be metal.

The metal element provides a sense of stability and reliability. Rats with the metal element are also admired for their capacity to turn an unlucky situation into an opportunity. They are experts in always looking on the bright side of life.

But the big question is, in case you are not an expert in Chinese astrology or are new to this concept: Who belongs to the Rat Sign? Well, it depends on the year that you were born. The Chinese Zodiac is divided into 12 animal signs that take turns within a period of 12 years to spread their spiritual influence and provide the newly born with their traits.

The cycle starts every 12 years with the Year of the Rat, and is followed by The Ox, The Tiger, The Rabbit, The Dragon, The Snake, The Horse, The Goat, The Monkey, The Rooster, The Dog, and finally the Pig. And this sequence will repeat itself again and again.

Since the Chinese New Year 2020 will be all about Rats, it is convenient to go a bit deeper regarding the personality of those born in a Rat Year. To begin with, they really know how to make a good impression and how to be liked. They have a very strong magnetism that if put into a good cause, can help them achieve many important things.

With money they are very cautious, sometimes to the extreme. However, they have a weakness for collecting useless objects that makes them spend money in an unnecessary way, instead of covering more basic needs.

Men that are born in a year of the Rat have a strong sense of adaptation. No matter the circumstances, they make any environment their own. They are full of resources and ideas to make themselves noticed or to overcome any difficulty.

Women that are born in a year of the Rat are very responsible and methodic. Organization is their secret weapon to solve any problem without the help of anyone. They know that an organized mind, that covers all scenarios and comes with a structured plan, is better than a mind full of chaos that leaves everything to improvisation.

The Signs that are more compatible with Rats are Ox, Dragon, and Monkey. In the Ox, the Rat will find an ally for work and life. The Dragon on the other hand, is the perfect complement for success as they share goals and understand each other perfectly.

In the case of the Monkey, they will find a great and long-term companion with whom they can share their existence.

Something completely different happens with Horse, Goat, and Rabbit, which are the least compatible signs with the Rat.

Horses crash a lot with a Rat, mainly because of expectations. Goats are more obsessed with taking advantages of the achievements of a Rat, than trying to connect with them spiritually.

Finally, Rat and Rabbit are like oil and water. The Rabbit will eclipse a Rat, while the Rat remains there without even opening their mouth.

If you look at the animals of the Chinese Zodiac, you will notice that there is an important absence. This has an interesting and humorous explanation in which the Rat is involved.

According to an ancient myth, the Jade Emperor organized a race to determine the position of each animal in the zodiac depending on the order in which they arrived to congratulate him on his birthday.

Before everything started, the Cat thought that it would be a good idea to take a short nap. So, he told the rat to wake him up. But the rat was so nervous that it left without the Cat, completely forgetting that he was sleeping.

Apparently, the Rat was so keen on being first, that it end up tricking the Ox to cross the river on top of him and once they arrived at the other side, the Rat jumped quickly to finish the race in the first position.

And even though the Rat would have finished the race in a position much further back without the help of the Ox, which should have won, the Ox preferred not to make a scene and was satisfied with the second position.

One by one the other animals arrived. But the poor Cat suddenly woke up and noticed that the others were long gone.

The Cat rushed to see if he could reach them, but all his chances were lost. When he finally arrived to see the Jade Emperor, it was too late. All the 12 positions of the Chinese Zodiac were taken.

And since then, the Cat and the Rat are considered to be enemies.